Today, I was starting my CentOS and I got 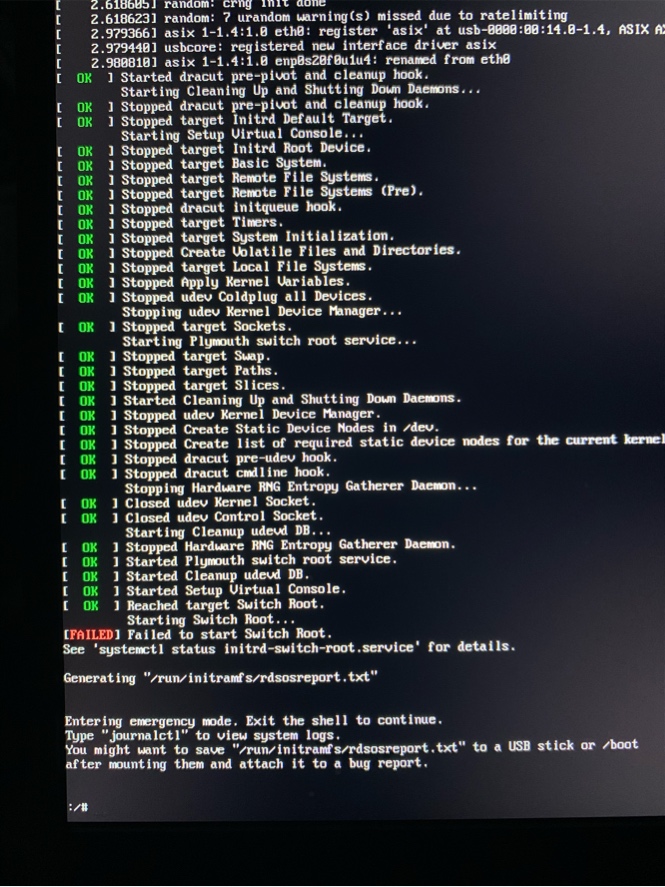 directory is empty, I don't know where get some copy. 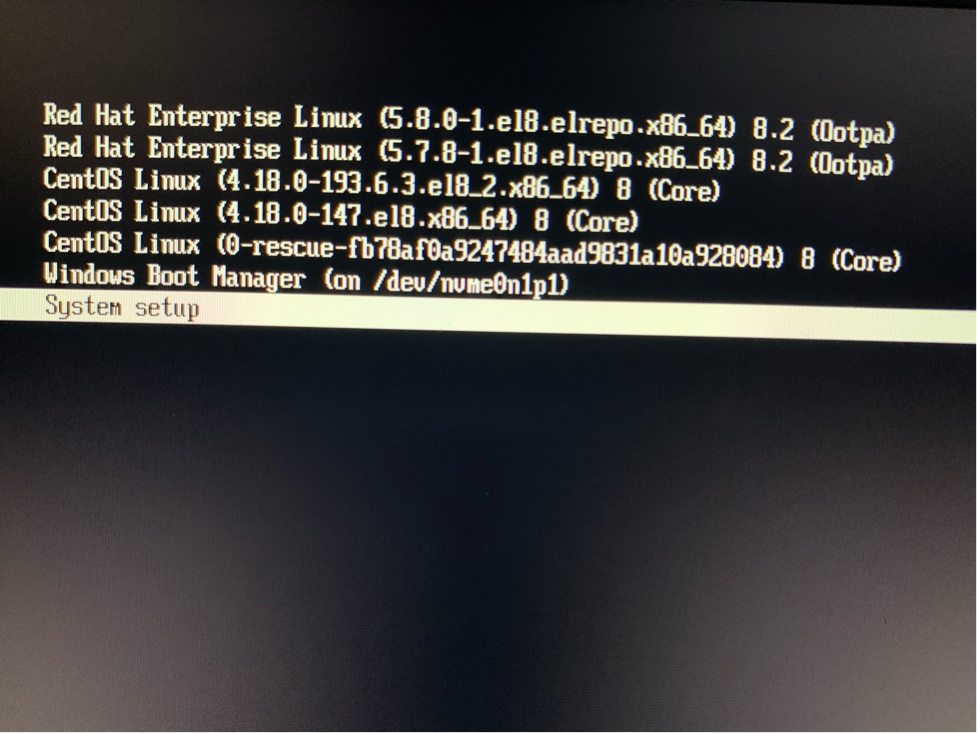 In the image, the only entry working is Rescue The CentOS entry that is above the Windows entry

Thanks for help!
Top

I have the same issue too, but I don't now how to fix it, I hope that someone could help.
Top

Well, this update bricked my bootloader (blank screen on reboot, not even grub). It was necessary to start my system from a rescue disk. I flailed around with grub2-mkconfig, grub2-install, dracut, etc. for hours (Linux system management is not my day job). Finally I got the system booting at least partway, but now I had the exact problem described by the Original Poster.

So, here is what I was able to determine, and a workaround that solved the problem for me.

2. Confirming this, I was able to start my system manually from the "Failed to start Switch Root" emergency mode by forcibly mounting my system root tree on /sysroot. I did this with

and then logging out of emergency mode with control-D. Of course you might have to use something else instead of /dev/sda3 depending on what partition has your system root tree, and if you have SELinux enabled and it has to reindex, you may have to go through this twice. But it worked! Now the problem was that I'd have to do this every time I rebooted the system.

3. So the question is, why is the boot process not mounting the main system root on /sysroot? There are no indications that the mount is being attempted and failing; it's as if the boot process isn't even trying.

4. When grub2-mkconfig creates the grub.cfg file (located in /boot/grub2/grub.cfg for non-UEFI systems) it knows very well where the kernel should look for the system root, so it places that information in the grub file to be passed to the kernel in the latter's command line. For example, in my grub.cfg file is a line that says...

...which I believe is supposed to tell grub to pass this UUID along to the kernel command line so the kernel knows where to look for the main system root.

5. However, looking at /proc/cmdline in the emergency mode shell indicated that grub was NOT passing the system root information to the kernel on startup. That could explain the problem. But if so, why wasn't it?

The default contents of the second file (for the most recent kernel) started out looking like this:

7. So I wondered ... what if something is going wrong with getting the system root tree ID passed to the kernel under this new /boot/loader/entries bootloading approach? So...

I have no idea if this is due to a bug in the new grub system or a misconfiguration on my part. I'm guessing this will fail next time I do a kernel update. But for now it appears to be a successful workaround.
Top

That info should be coming from the $kernelopts variable that's on the options line. And that info is kept in the grubenv file which is either /boot/grub2/grubenv or some path under /boot/efi (don't use UEFI so don't know). Running grub2-editenv list should show it to you and it should look something like

Did you run grub2-mkconfig -o /boot/grub2/grub.cfg (or its UEFI equivalent)? I suspect that would probably set that variable if it doesn't exist. Also that grubenv file seems excessively fragile and has to be exactly 1024 bytes in size and is padded with # symbols to fill up the rest of the space. It might be worth moving it elsewhere and seeing if grub2-mkconfig will recreate it if running it the first time did not fix it.
CentOS 6 died in November 2020 - migrate to a new version!
Info for USB installs on http://wiki.centos.org/HowTos/InstallFromUSBkey
CentOS 5 is dead, do not use it.
Full time Geek, part time moderator. Use the FAQ Luke
Top

Thanks TrevorH. I did indeed run grub2-mkconfig -o /boot/grub2/grub.cfg (several times in fact, as I flailed around trying to unbrick the bootloader after the update). I didn't put any energy into the grubenv file, sounds like that was a good thing if it is so fragile. But if I run grub2-editenv list now, I get the following:

The UUID for root matches that of my /dev/sda3. So it would appear the bootloader's failure to know where my root system tree is located is not due to a misconfigured grubenv file.

Seems pretty significant that the problem is solved by adding the simple "root=/dev/sda3" in the relevant kernel boot config under /boot/loader/entries. Otherwise the root tree identification is somehow not passed to the kernel, though it's supposed to be.

Also seems significant that this happened after the new, major update to grub2 in which it relies on these new /boot/loader/entries files for kernel specifications and not on the grub2.cfg file...?
Top

Thank you very much, Sondergaard, for your instructions. They helped me boot my system again.

I followed TervorH's suggestion and checked the grubenv, and root UUID was correct. Upon reboot I ran into the same issue.

I applied Sondergaard's workaround by editing the loader entry for the current kernel, but I assume that this is not a lasting solution.

Has a bug been filed for this?
Top

Thank you, Sondergaard, for the steps to work around this. They were the only thing that worked (my /sysroot was also empty, despite grub2 env having the correct UUID for the root partition). I also fear that a kernel update will break this again, and wonder if a bug report needs to be filed?

I have had the same issue when I restarted after the latest update, which updated the following packages:

This server is in running the cloud, and appears not to be running UEFI (no /sys/firmware/efi present).

Not sure if any more info is needed; if so, please ask. First time posting here.
Top

Apparently since the new Boot Loader Specification (BLS) came out there have been instabilities on some setups involving the grubenv file that result in the $kernelopts variable not being set or read as desired.

See, for example, the similar RHEL 8 case https://bugzilla.redhat.com/show_bug.cgi?id=1651686. One of the contributors experienced reboot failure at switchroot due to a problem with his grubenv file. That bug involved add-on kernel options, however, not the basic option of identifying the root partition.

This may well be a bug; the similarity to other reported bugs with BLS and the fact the behavior manifests upon updating to the new BLS are suspicious. But I don't have the skill with the Linux bootloader to prepare and pursue a bug report responsibly. Perhaps someone with that skill will see this and have an idea what's going on.

Next time I update my kernel, I will try TrevorH's suggestion of deleting (that is, renaming) the grubenv file so it can be recreated. Possibly grubenv is invisibly corrupted in a way that the tools won't show but that may be corrected by regenerating the file from scratch. Wow, I haven't dealt with invisible file corruption for decades!
Top

Don't forget to check the size of the grubenv file, it has to be exactly 1024 bytes or it is invalid.
CentOS 6 died in November 2020 - migrate to a new version!
Info for USB installs on http://wiki.centos.org/HowTos/InstallFromUSBkey
CentOS 5 is dead, do not use it.
Full time Geek, part time moderator. Use the FAQ Luke
Top

I have two installations of CentOS 8. Both of them have this problem.

I checked the grubenv file size and it is exactly 1024. Contents are correct, too.
Top
Post Reply
14 posts