Best way to use a second internet connection

Best way to use a second internet connection

A few days ago, when my CentOS box was ready I decided it was time to finally use the second internet connection in the house. Nobody was using it and my three teenage sons who are massive data hogs weren't even aware of it.

I have enough basic networking knowledge to keep our home network running, so I gave this a shot.
Here's what I wanted to accomplish:

Not sure if this is really relevant for the question that I have, but it might be: our main network that everybody uses is wireless. I have five wireless bridges (actually all airport extremes in bridge mode) that connect all the locations in the house with the office (smack in the center of the house) where the cable modems and the bridge that owns that network are located. Since those bridges don't have a clue who would be the best one to take on a given wireless client I allow only the two fastest (last AC version) to have wireless clients.

Here's what I came up with - and it's really not that elegant, but it mostly does what I want it to do.
1. Switched the second Comcast router (can't turn off DHCP) into bridge mode
2. Connected another router (DHCP turned off) with its WAN port to that comcast bridge
3. Connected the new router to the first Comcast router (regular port) which is also the DHCP server (10.1.10.1) and gave it a static address, like 10.1.10.2.

So, my CentOS box which is behind one of those apple bridges, currently has that connection all to itself, simply by using the new gateway 10.1.10.2. Now is there a better way to accomplish this? With routes maybe?

Re: Best way to use a second internet connection

What you have physically ... sorry, cannot follow. Perhaps a picture?


If one would have a configurable router with three ports: WAN-A, WAN-B, LAN, then the LAN subnet members would not have to know about what is behind "the one and only" router. The router could do load balance/HA/QoS for all of them.


Linux can have a route that has more than one "nexthop", i.e. could use both .1 and .2. With weight to give one a preference. I have only tested it, but never configured.
Top

Re: Best way to use a second internet connection

So, here's a picture of the essential pieces - all the apple bridges route to connection one. Currently, if any of the machines wants to use connection 2 gateway has to be set to 10.1.10.2. 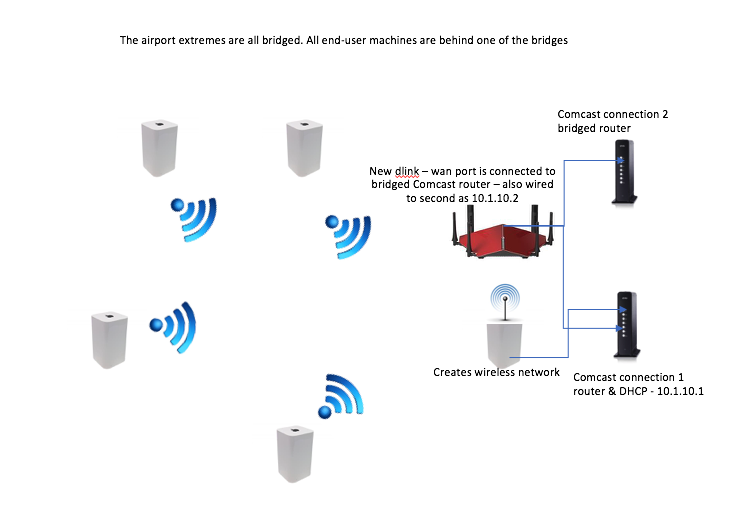