Urgent! Ifconfig ip address not same as under network-scripts file

Urgent! Ifconfig ip address not same as under network-scripts file

we have a cantos server running on a hyper V. It has 2 nice. Someone powered off the VM by accident. After we restarted the server, there lost connection. And we found out tate the ip address was wrong. The ip addressws show in IFCONFIG are wrong but the ip in ifcfg-eht0/ifcfg-eth1 are correct. How come they are different? I have restarted the server again. but still remain the same problem. can anyone pls help. I don't know linux. This server was configured by someone long ago. 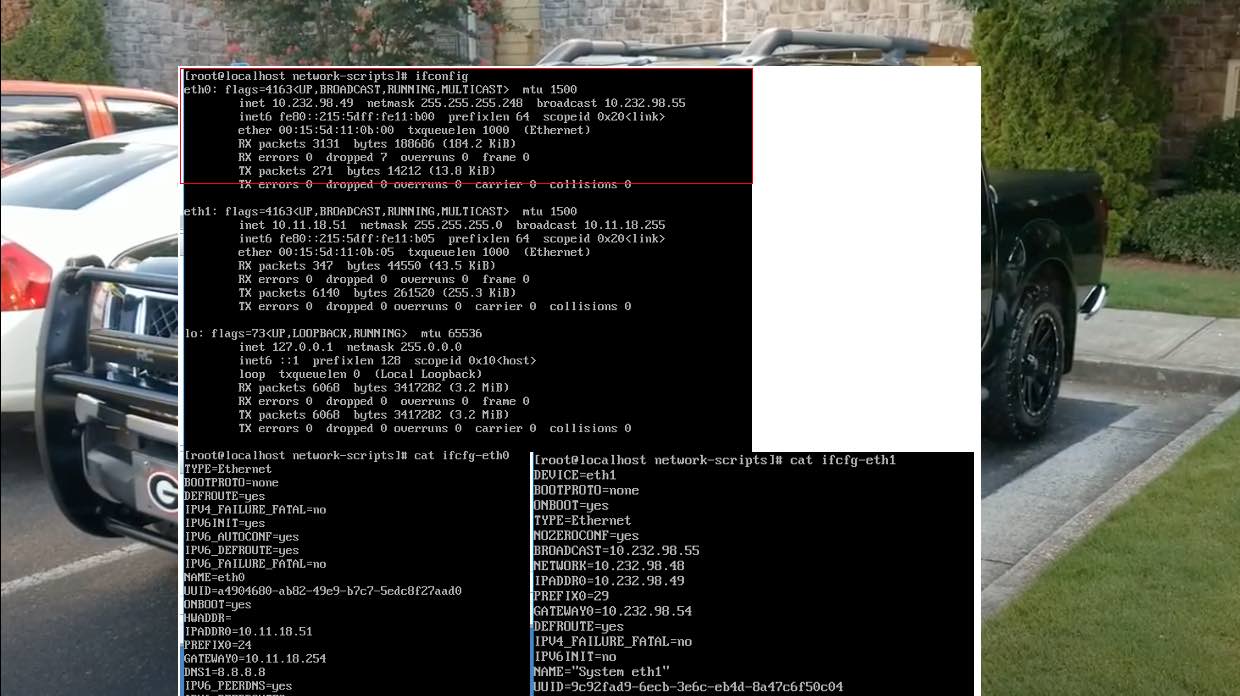 Re: Urgent! Ifconfig ip address not same as under network-scripts file

The ip addresses are as you specified them but they are assigned to the opposite interface.

Try editing the ifcfg-ethX files and adding to each of them HWADDR="00:15:5d:11:0b:xx" where xx is the right digit to match the correct MAC address on the NICs you have.
CentOS 6 died in November 2020 - migrate to a new version!
Info for USB installs on http://wiki.centos.org/HowTos/InstallFromUSBkey
CentOS 5 is dead, do not use it.
Full time Geek, part time moderator. Use the FAQ Luke
Top

Re: Urgent! Ifconfig ip address not same as under network-scripts file

First: default method to configure network in CentOS 7 is NetworkManager.service. The more or less mutually exclusive method is network.service. If your system does use NetworkManager, then you do get a summary with nmcli

Second: the ifconfig and route commands did get better alternatives two decades ago. Whether you have NetworkManager or not, you can look at active configuration with:

If NetworkManager is in use, then it is safer to use NetworkManager's tools: nmcli, nmtui, or the GUI applet to modify the config.
To see both saved and active config of those two connections one could use:

The ethN device names use the "old style". The names are created in the order the devices are enumerated during boot and that order is random. I have encountered this precisely with VM's. (On some virtualization platforms CentOS still uses the "old style" automatically.)

The "new style" device names ought to be predictable, i.e. persistent -- same on every boot -- and there matching config to device by connection.interface-name is sufficient.

The default solution in CentOS is to use FirewallD, which reads from the network connection which ruleset that connection does use what name the device has this time. That is about only decent feature in FirewallD that I can think of.
Top
Post Reply
3 posts • Page 1 of 1