I have an IBM X3650 M4 server. The server is supported by Redhat 5, 6 & 7. Trying to install CentOS 7 or 8 fails as the disks are not seen. I am hoping a firmware update might help with 7 or 8. The IBM Bootable Media Creator to update the firmware

I have installed CentOS 6 on this, but the IMB tool to update the firmware doesn’t work. There is no error message - it just doesn’t work. I am hoping that a fresh install of CentOS 6 might help.

The problem is, trying to install CentOS 6 on the machine keeps failing. The URL to the online repository is accepted. The system downloads files. But eventually I get the screen shown in the photograph attached. The mouse pointer will move, so the system has not hung, but it is not working. At this point it has not asked what system one wants to install, or users or passwords.

The hardware configuration is

* 2 x Xeon processors
* 104 GB RAM
* A couple of 256 GB disks, which have CentOS 6 on them
* Nvidia Quadro Graphics card - I forgot the exact model.
* LED monitor connected via DVI-cable
* 1 x 1 Gbit/s ethernet port connected to an 8-way consumer grade switch.
* DVD drive, which I am using to try to install the OS via a network installation.

Have you any suggestions? 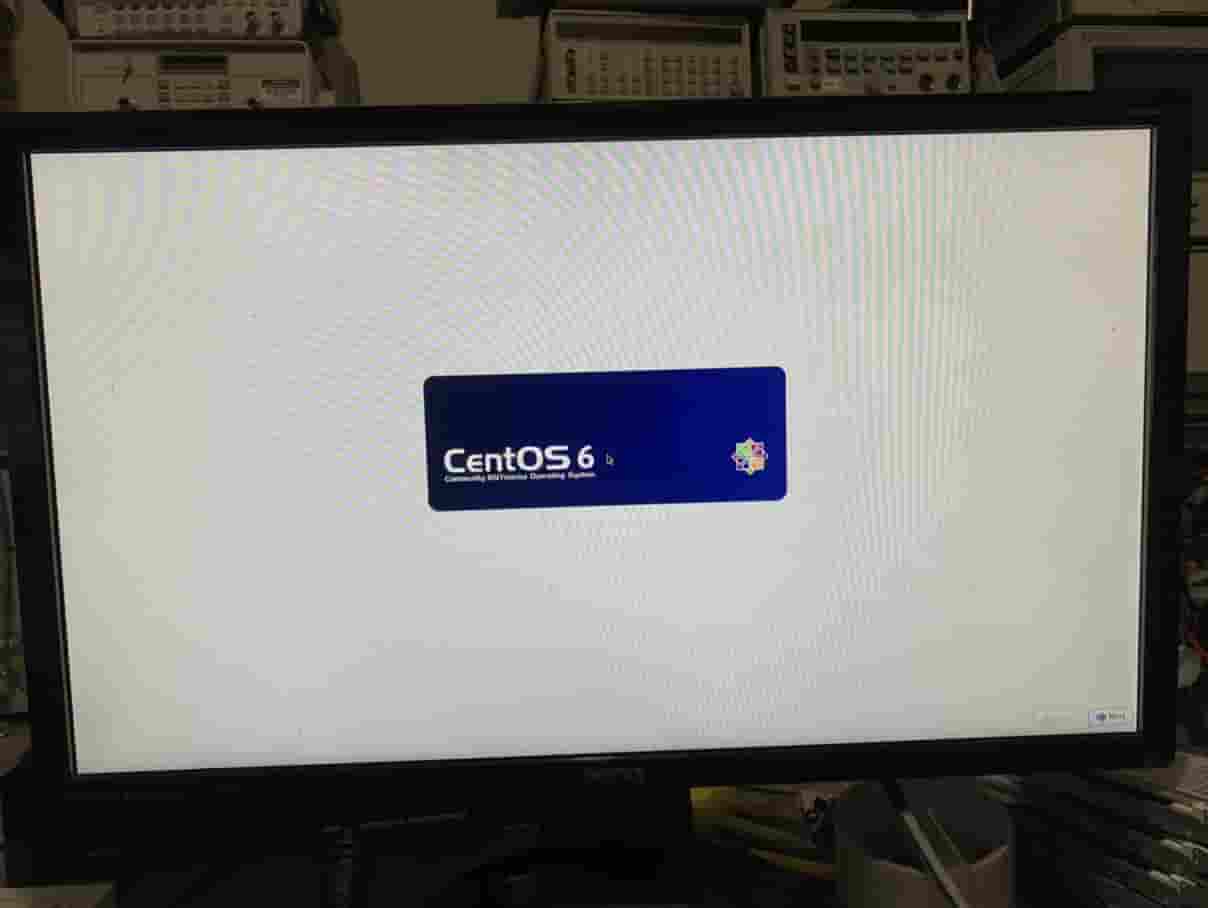 What does that button in the bottom right corner of the screen say? I can't read it as the pic is too blurry/small.

It's very unlikely that a firmware update will help to get your RAID controller seen as it's far more likely that it's one that Red Hat have deprecated and removed from the newer versions. CentOS 8 in particular removed a whole raft of RAID controller drivers from the distro for older models.

I'd suspect it possible that your firmware upgraded might need one of the compat-* packages for glibc or libstdc++ installed so you might try installing some of those to see if they help.

You can also use Ctrl-Alt-F2 to switch terminals and on F2 you should find a root command prompt. Using that to run lspci -nn | grep -i raid and posting the output here might help to determine the exact model of controller and its support status.
CentOS 6 will die in November 2020 - migrate sooner rather than later!
Info for USB installs on http://wiki.centos.org/HowTos/InstallFromUSBkey
CentOS 5 is dead, do not use it.
Full time Geek, part time moderator. Use the FAQ Luke
Top

Oh this is embarrassing - that button does say "Next". It is very small though, so easily missed. I remember being caught with this before trying to install CentOS 6 earlier, but then seeing it.

I'm just in the process of doing an install, which seems to be going okay now.

so I'm hoping it will work on CentOS 7. Since CentOS 7 could not see any disks, I'm hoping an upgrade to the firmware might fix that.
One problem might be that there are different variations of the IBM x3650 M4, fitted with different RAID controllers. I might be stuck if my controller is not supported. In their infinite wisdom, IBM doesn't even put the exact model number on the front. Redhat does not say what variation of the IBM x3650 M4 server that Redhat 7 was tested on. I believe mine is an LSI controller, but I can't check the exact version, as the installation of CentOS seems to be progressing fine at the minute, and I do not want to risk messing that up.

But updating the firmware is not easy on this. One can't just download a bootable CD and it perform an update like any other machine I have ever updated.

* The version of the commercial software I wish to use is supported on Redhat 4 and 5 - plus some Suse versions. (I did need to spoof the CentOS /etc/redhat-release to get it to believe it was on a Redhat system, as otherwise, it would not install.

It is strange, but new high-spec servers cost a lot more than high spec workstations. What I really want is a high-spec workstation, but on the used market it's possible to get servers with better CPUs and more RAM than it is workstations for a sensible price. This server was £350 (GBP), with a couple of 6-core Xeons and 128 GB RAM. I could not buy a workstation of similar specification for that sort of money.

I will run the

but I am not overly bothered about running CentOS 8 on this. None of the software I want to use is supported on Redhat 8,

I don't know if I might actually be better using Suse - I don't know if they support legacy hardware longer than Redhat. The software I want to run, as well as something else I am interested, are both supported on Suse. I will have to look into the advantages of Suse vs Redhat, since I am otherwise not too fussed - I only want to run some commerical software on this. For everyday tasks, a workstation that I have is far more suitable for my needs.